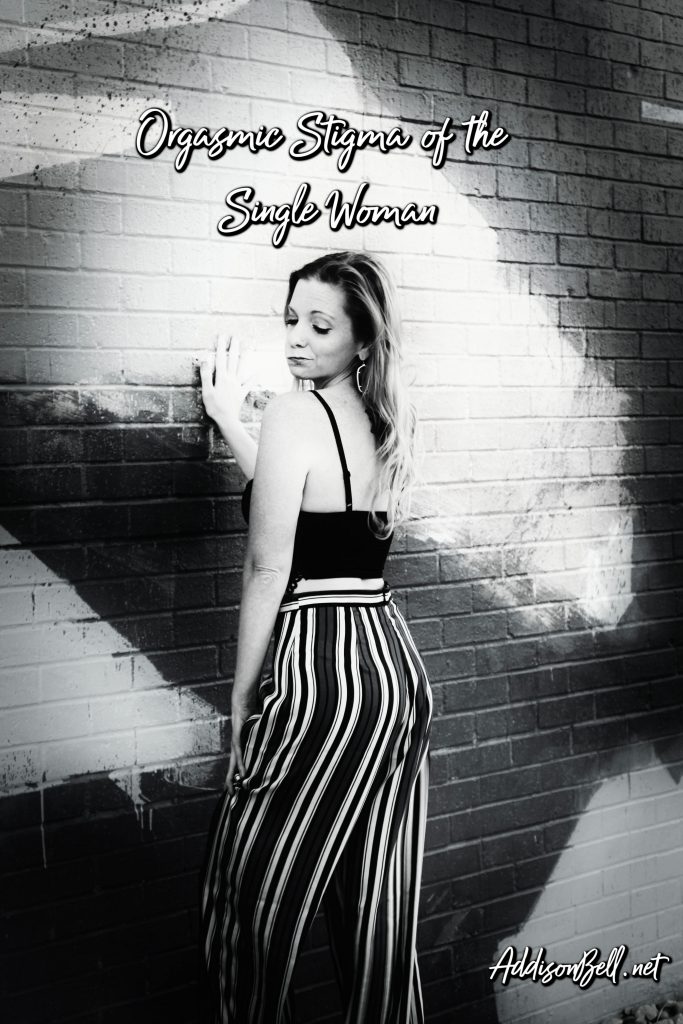 The other day I was having a conversation with a male friend and we were talking about sex, dating, and orgasm.
I had shared that with the current world happenings and being single right now, that I was feeling orgasmically depleted.
Then this friend proceeded to stir my anger by stating…
“You could have sex anytime you wanted it! Your orgasmic depletion is your own fault”.
I paused… I breathed… I did not throw the wine glass in my hand. I did not rip his head off!!!
He had tapped into something that always stirs my anger when I am single. The single woman stigma!
Now, before I share this I am in NO WAY saying that single people should step into their victimhood nor am I negating my continued sharing on law of attraction. At the end of the day our current reality is always based off of our thoughts and energies. We can have whatever it is we desire in life if we can align.
But with that being said…
As a single woman I am very aware that I could easily pick-up a one night stand. Though this does not mean that I would be having good sex that would fill me orgasmically. In truth, the chances of this happening on a one night stand or even a brand new relationship are limited due to lack of trust and ability to fully surrender with a new partner.
A one night stand may stir energies but true orgasm comes from the heart-opening. It comes from being able to drop down with a partner and having a partner that is fully present in the moment with the consciousness and skills needed. The chances of true orgasm also go down when a man doesn’t know your particular body.
Now it is true that you can have amazing surrendered sex with someone the first time. Though that man would have to be able to touch the heart of his woman quickly, be able to stir her desire, and have a deeper level of presence.
I’ve had a few scenarios where the sex was hot from the first time and I was able to surrender into the divine masculine energies being provided.
This however, is not true of most experiences nor true of most men!
Though in our society it is seen as a single woman’s fault if she is orgasmically depleted while when a woman in a committed relationship is feeling the same way we instead pity her and feel bad that she is “stuck” in a relationship that isn’t filling her in the bedroom.
I often hear those that are in marriages or committed relationships sharing that if they were just single things would be better and they would be having better sex.
The average man… married, single, dating, complicated, etc…
Does not take the necessary time, attention, or have presence with their woman… thus making the average woman very underf*cked!
Committed relationships have their own orgasmic challenges with the possibility of distrust, hurts, resentments, and barriers to communication having seeped into the bedroom. These are very real challenges in relationship!
Though this does not trump nor negate the challenges of the single woman who is trying to get to know someone and drop into her body. If she has been doing the dating circus then she has probably had just as few orgasmic moments as the woman in the relationship.
A woman orgasmically depleted is a woman orgasmically depleted.
When a woman isn’t getting fulfilling orgasm then many things start to change in her body, mind, and energy in a short amount of time.
* Hormones can get out of whack
* Physical energy is depleted
* Weight gain and digestion issues
* More stress, anxiety, depression
Just to name a few in a long list of symptoms of being underf*cked.
So to place one on a pedestal and to continue to shame the other does a massive disservice to women as a whole.
And so hopefully next time you think about looking at a single woman and think that this is simply the easy road… the orgasmic road… or try to shame her struggle with the above symptoms.
I hope you stop and consider a different perspective.
Love, Light, & Blessings,
Addison
~~~~~~~~~~~~~~~~~~~~~~~~~~~~~~~~~~
Fast Track Expansion Coaching Sale
In order to help people rise from this in a more aligned place and with goals already set and in motion. I am offering a coaching deal that will never come back around!
These are short 30min video/phone coaching sessions focused on the topic of most interest to YOU (sex, relationships, goal alignment, expansion in self).
I will be waiving my consults and we will be jumping right into the depths of your growth.
You will receive: Two 30 mins coaching sessions, Expansion Assignments, and check-in messages with Addison throughout the next month.
All of this for $77!
This is an unheard of price for my coaching sessions.
Though I really want to help add more light and love into tis time period.
Take advantage now because start date for these sessions must be on or before April 23rd.
Fill out application here: https://addisonbell.net/isolate-coaching-deal/
*photo credit to Photography in Wonderland

You Have to Give

When Energy is Volcanic

You Are Loved & Supported in the Chaos